Financial Economics is a graduate level book published by MIT Press (about 1,200 pages)

I am delighted to announce that the book has printed and that MIT Press would make it available very soon (officially, from Nov. 22, 2022)!

I have been circulating drafts of this book for 20 years or so (mostly, online) and I wish to thank those who provided me with countless suggestions during the preparation of my work. I used to wrap up my drafts with a cover (representing Suez Canal and Panama Canal), which isn’t included in the published version of the book. I still like this unofficial cover, however, and I gladly reproduce it here! 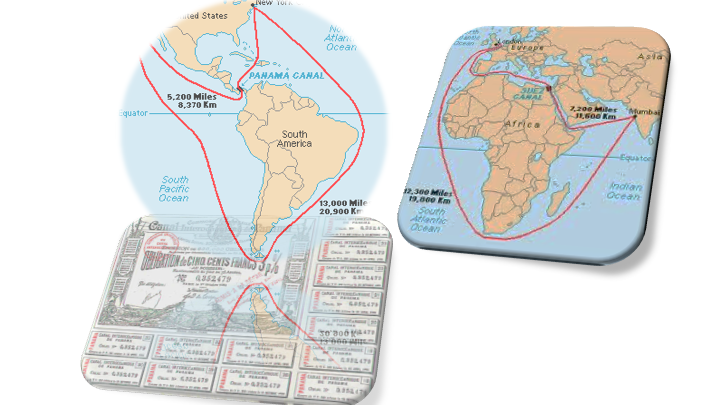 Top maps: Illustration of the increased efficiency in maritime routing allowed by the Suez Canal (right panel) opened in 1869, and the Panama Canal (left panel) opened in 1913, two amongst the most enduring technological marvels with global economic and political implications.

This book originates from notes that have circulated for about 20 years under the title Lectures on Financial Economics. The book aims to track the milestones achieved in this vast field. It provides a comprehensive reference while attempting at organizing about a century of work, while relying on a rigorous analytical framework and, finally, while providing methodological tools that try to make it self-contained. At the same time, the book endeavors to help explain real phenomena and how these phenomena and, sometimes, market practice, have helped economists reformulate previous theories. The book comprises three parts, broadly described in a moment. The Introduction contains a great deal of details and motivation regarding this work.

The first part provides the reader with foundations in asset evaluation, information problems in asset markets and corporate finance, and methods of statistical inference.

The second part contains the main answers the field has attempted at in order to explain phenomena ranging from excess price volatility to market liquidity, from market dysfunctionalities (e.g., crashes) to failures of markets to align asset evaluations to economic fundamentals, or from the countercyclical behavior of financial volatility to the amplitude of business cycles that is attributable to capital market frictions. These explanations rely on a vast array of models that include incomplete markets, idiosyncratic risk, restricted market participation, heterogeneous beliefs, learning in markets with incomplete information, production, Knightian and model uncertainty, the reformulation of standard assumptions on agents’ preferences, asymmetric information, agents’ irrational behavior, coordination failures, limits of arbitrage and other frictions including information networks, segmented markets, or decentralized trading systems and, last, but not least, frictions at the origins of the interconnectedness of capital markets and the broader macroeconomy.

The third part deals with the main instruments that enable institutions to be protected against the huge volatilities and uncertainties in capital markets that are described in the second part. It provides thorough treatments of pricing and risk management practice around the main derivative instruments in both equity and fixed income (including credit) markets. It describes the rationale behind the process leading to the new “volatility markets” and interest rate and credit markets. It relies on a large battery of models that have become the market standard and also incorporates practice emerged after the global financial crisis of the late 2000s. The methodology underlying these models is organized as an attempt at providing the reader with a disciplined notion of “financial engineering.” At the same time, this part emphasizes the weakest points of this notion, the spaces in which its assumptions are mostly fragile, and the complexity of some market behavior resulting from a poor or uncoordinated usage of its tools, which lead to procyclical phenomena such as market crashes and other dysfunctionalities, including those observed during the global financial crisis.

This book is unique as it provides an integrated treatment of the field while organizing the discussion of a large variety of topics throughout an organically designed plan. It emphasizes economic foundations, but it strives to emphasize the progress the field has made to understand real phenomena in the course of financial history.

The book aims at becoming a durable and authoritative reference in one of the most difficult but also important fields of economics.